Are You Making These 3 Common Push-up Mistakes? 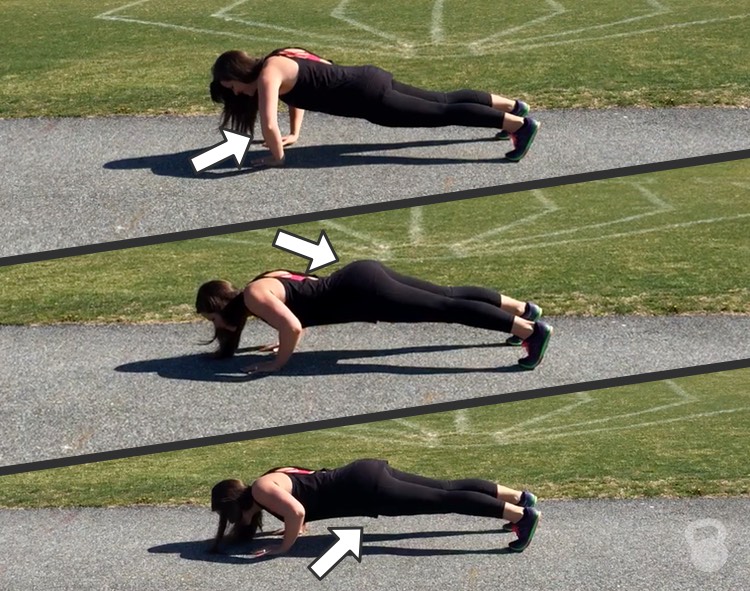 This post may contain affiliate links. Read my disclosure.

The push-up is an incredibly effective body weight movement that engages the shoulders and triceps, and activates both the abdominal muscles, and the glutes. It helps build strength, has an endless amount of variations, and is easy to modify.

To help you perform the push-up injury-free and with proper form, here’s three common mistakes people make when performing the push-up, along with push-up technique cues to correct these mistakes.

The most common mistake people make when doing the push-up is flaring the elbows out at a 90 degree angle. While most people are taught to perform the push-up this way in grade school, flaring the elbows out puts unwanted stress on the shoulder and elbow joint, and reduces chest involvement. Overtime, this can increase your chances of experiencing an overuse injury. If you deal with shoulder instability, or have pre-existing elbow or shoulder conditions, flaring elbows is not your friend.

Mental Cue: When performing the push-up, think about keeping your elbows at a 30 degree angle. The elbows should come slightly back as you lower your body to the ground, but should not be touching your body. As you get to the bottom, your scapulae—or shoulder blades—should come together, and as you push yourself up, they should move apart.

When doing the push-up, elbow flaring is not your friend.Click To Tweet

While in an extended plank position, many people rotate their pelvis forward, which creates increased extension (curve) in the lumbar spine. This is called an anterior pelvic tilt, but has also be coined “stripper” or “butt in the air” syndrome because the butt pops up and out. While this may look good and get more likes on Instagram, it’s a terrible way to do push-ups because it puts strain on the low back, and disengages the glutes and abdominal muscles. In essence, it turns off the core, and the low back takes on the task of stabilizing the body. Overtime, this can lead to pain and injury, and reinforces improper movement patterns, including gluteal amnesia.

Mental Cue: Just before you begin the push-up, think about pointing your belly button towards your wrists. This will allow your pelvis to sit in a neutral position, and keep your hips just underneath your ribcage. While doing the push-up, tighten your glutes, and think about engaging your core to stabilize your body.

Number 3: Bending at the Waist

Many people make the mistake of lowering their upper body to the ground by bending at the waist. As a result, the core isn’t engaged, and the neck often drops forward to “swing” the body up and down. While you can knock out push-ups faster this way, it’s not a complete push-up, and can strain the low back.

Mental Cues: When performing the push-up, think about moving your body as one unit. The pelvis should remain neutral, and there should be no flexion (rounding) or extension (curve) in the low back. Think about squeezing the glutes, and maintaining a solid plank position throughout the entire movement.

Got any questions about how to perform a proper push-up? Ask them below!

Download my FREE 72-page 12-Week Home Workout Program, which includes everything you need to implement a customized workout plan you enjoy from home.

It's on its way! Check your inbox to download the program.